The Chiappa Firearms M6 are interesting combination guns directly derived from the famous USAF M6 Aircrew Survival Weapon, but with some significant added versatility. Let's see the last born in the line, the M6 rifle/shotgun with the X-Caliber multicaliber kit 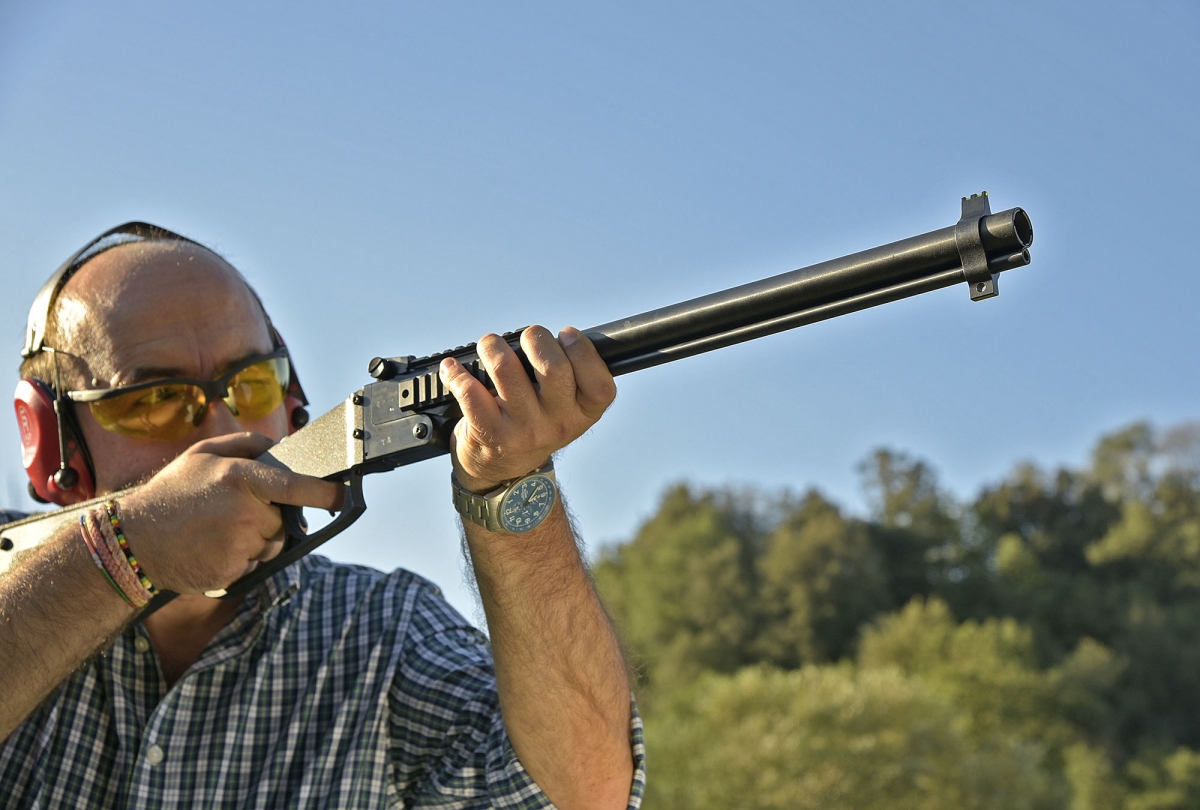 One smoothbore barrel, one rifled barrel. The minimum you need to survive (and have fun)

The original M6 Air Crew Survival Weapon, adopted in the late '50s by the USAF for their pilots.

Originally developed by the Winchester Repeating Arms Company and manufactured by the Ithaca Gun Company, the M6 Air Crew Survival Weapon was issued to the United States Air Force pilots starting in the late 1950s.

An over-and-under small-sized carbine, it could fold down to a 15-inch long package to fit into the aircrewmen's tiny survival kit. It sported a selective external hammer and a squeeze-lever that replaced the trigger, making it easier to use when wearing gloves.

Although very similar to the original US gun from 60 years ago, the new Chiappa Firearms M6 gun design is more rational and robust

The M6 Air Crew Survival Weapon was however mostly inadequate for anything else but to hunt small game for food in survival situations; hence, the USAF phased it out during the 1970s, leaving the pilots to carry only their service pistol.

But still, its undeniable appeal paired to the advantages it offered for some civilian purposes, and as the years went by, a few gunmakers distributed several commercial variants of the design – most notable of them being the M6 Scout, manufactured in Czech Republic for Springfield Armory and available on the U.S. market until 2007.

At the 2014 edition of the SHOT Show, the Italian-based Chiappa Firearms company first showcased its own takes on the famous M6 survival weapon design: two combination rifles – dubbed the M6-22 and the X-Caliber – being essentially the same gun with very little to tell them apart.

An M6 on steroids

The design of the gun is spartan, but solid and reliable

Apart from the name and a slight outer resemblance, the original M6 Air Crew Survival Weapon and Chiappa's M6-22 and X-Caliber combination guns do not have much in common.

So to speak, the Chiappa guns are bulkier to withstand the use of higher calibers, and longer to meet the minimum overall and barrel length limits imposed in certain jurisdictions.

The Chiappa Firearms M6 box: "survival", tells it all

The Chiappa Firearms M6 box inside, with the X-Caliber kit

A view of the steel framed, syntethic polypropylene foam stock

The make of the stock is one of those guns' most peculiar features: while its skeleton is made out of stamped steel, its body is essentially a sturdy and rigid polypropylene foam block, which absorbs recoil while keeping overall weight to a minimum (about 2,5 kilograms, or 6 lbs).

Do not expect to feel like handling a fine gun: the stock essential design - quite squared - makes it a little bit cumbersome, especially when firing the 12 gauge barrel, also because of the overall lightness of the gun.

At top of the stock we find room for the cleaning kit (supplied), two 12 gauge shotshells and five .22 caliber cartridges

The Chiappa M6 gun come suplied with a cleaning kit, housed in a container placed inside the stock

The Chiappa M6-22 and X-Caliber over-and-under combination guns are fit with cold-hammer forged barrels with automatic extractors. The frame of both models is also manufactured out of steel.

Just like the original M6 Air Crew Survival Weapon – and just like Chiappa's own Little Badger carbine – the M6-22 and X-Caliber combination guns fold in two for easier storage or transport; the break-open action is activated by a massive lever that also works as a trigger guard.

Breaking the guns open for loading will also automatically cock the internal hammers, which on the M6-22 and X-Caliber combination guns replace the selective external hammer found on the original M6 Air Crew Survival Weapon.

Two triggers: the front one serves the top smothbore barrel; the one at back serves the bottom rifled barrel

Each barrel has its own single-action trigger. Behind the top-break breech there is the manual sliding safety, easily managed with the thumb.

Pull the lever, unlock the breach and open the barrels

Chambers are laoded and ready

Close back the beach of the gun

The Chiappa M6 is ready to fire

The two 47cm/18.5" barrels are cold hammer forged out of chromoly steel; the top smoothbore barrel comes with an integrated cylindric choke, while the bottom .22 Long Rifle caliber barrel has six right-handed grooves, and a 1-in-16" rifling twist.

The barrels muzzles: it is visible the cylinder chocke of the smoothbore barrel. The front sight is a high visibility fiber one

The adjustable rear sight, with a sliding ghost ring sight, is the only real problem of the Chiappa M6 gun: the stock profile makes almost impossible to allign the sights properly

such as the Trijicon MRO, distributed in Europe by Prima Armi

The front sight of the Chiappa X-Caliber and M6-22 combination guns is fixed, and comes with a high-visibility fiber-optic insert.

The rear sight is adjustable for windage and elevation, manufactured out of polymer, and essentially a copy of the M1 Carbine's rear sight. It is basically the same rear sight found on Chiappa's M1-22 autoloader and – once again – the small but nonetheless highly successful Little Badger carbine.

Yet another feature that the M6-22 and the X-Caliber combination guns have in common with the Little Badger model is the triple MIL-STD 1913 Picatinny rail located on the frame, allowing the installation of optical sights or other useful accessories.

The X-Caliber system is made of 8 rifled barrels adapters which, inserted in the chamber of the 12 gauge barrel of the Chiappa M6, allow the use of 10 different calibers

What makes the Chiappa Firearms M6 combination guns appealing is the availability of the X-Caliber Set of conversion inserts.

Invented by Tim Ralston in 2013, the X-Caliber system was originally meant to shoot different pistol ammunition in traditional 12 gauge shotguns - over and under and side by side guns - making them an all around and cheap alternative for several possible uses.

The X-Caliber set made by Chiappa Firearms is packaged in an olive-drab green cordura pouch, containing eight 7" machined chromoly steel rifled barrels, to be inserted into the breech of the top 12 gauge barrel of the Chiappa Firearms M6 combination guns.

The X-Caliber inserts are also available as an aftermarket accessory, and are compatible with all 12 gauge shotguns. But after all, it is in combination with the Chiappa Firearms M6 guns that the X-Caliber system gives all its best in terms of versatility.

Choose one, a .44 Magnum for example

Insert the adapter into the 12 gauge barrel

An Italian all-rounder, thinking of America

The Chiappa M6-22 and X-Caliber combination guns are now finally available on basically all civilian markets worldwide, but they were conceived with a special consideration for the U.S. market and its peculiarities.

Not only are those two small and versatile combination guns perfect for small-game hunt, leisure plinking, formal target practice, and as an entry-level guns to introduce the youngest to the basics of marksmanship and safe firearms handling; but their low weight, their compatibility with a plethora of different chamberings, and their capability to fit in a small backpack will make them a great choice for those outdoors enthusiasts who may want to carry a defensive tools against wild animals when camping or hiking in the wilds.

5 shots group at 25 meters, shooting from a rest, with holographic sight

The Chiappa Firearms M6 is a simple, sturdy and fun to shoot combination gun, with a fascinating history at its back

Two shots (one fo each barrel)