"Stay informed to stay ahead": WFSA plenary meeting 2018 in Nuremberg

"Stay informed to stay ahead" was the topic of the 2018 plenary meeting of the World Forum on Shooting Activities, held in Nuremberg on March 8 amidst an international situation in pure turmoil 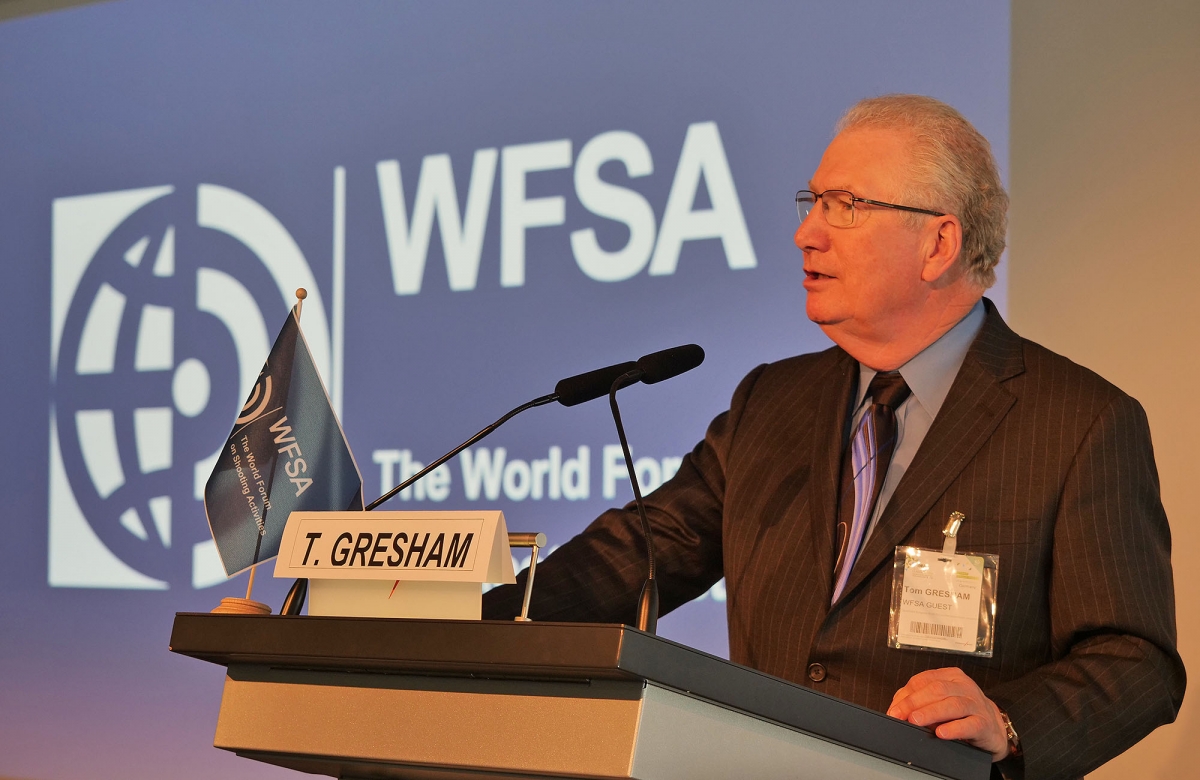 Tom Gresham, host of the Gun Talk Radio in the United States

The international situation is anything but positive for the shooting community.

In the United States, despite a solidly pro-gun Congress and White House, the anti-gun agenda regained momentum at a local, State and Federal level following the Parkland shooting. In Europe, while most Countries still need to implement the new and ruinous firearms directive – now infamously known as the "EU Gun Ban" – hunting activities are targeted by fresh restrictions in Poland and Norway. And when it comes to freedom of expression, particularly on the Internet, the global shooting community has been hit by a string of repressive regulations on many social media platforms – YouTube and Reddit being the last in a long list. And both the UN and the EU are double-timing their pressures to reach a global ban on lead-based ammunition.

The WFSA President Torbjörn Lindskog, during the opening speech

Those are the issues faced today by the World Forum on Shooting Activities – a pro-active organization of gun manufacturers, sport shooting and gun owners' associations recognized by the United Nations as a consultive NGO, and one of the world's most important forces fighting for our rights as gun owners. A difficult task to achieve – almost an impossible mission, considering the hard times we are facing.

WFSA held its 2018 plenary meeting on March 8th at the Nuremberg Fair center – the day before the official opening of IWA OutdoorClassics, as usual. The announced topic – "Stay informed to stay ahead" – was already pretty much of a harbinger of this year's meeting being more of a global status report than an occasion to draw "battle plans" for the future; and as a matter of fact the panels held by ATF senior advisor William Kullman and SAAMI executive director Rick Patterson consisted basically in a general analysis of the threats that our community is currentluy facing worldwide, while David Scallan, from Ireland – General Manager for Conservation for FACE – and Mario Ge from Italy – senior advisor for AFEMS – held a panel centered on the "Environmental developments", these being, the threat posed by UN and EU initiatives aimed at a total ban on all types of lead-based ammunition for hunting, sport shooting, and self-defense.

Much more positive – under the sheer point of view of gun rights advocacy – was the appointment of radio and TV host and gun rights advocate Tom Gresham as the winner of the 2018 WFSA Dr. Vito Genco Shooting Ambassador Award. Tom Gresham is mostly know for his role as the host of the Gun Talk Radio in the United States.

A moment of the 2018 WFSA Convention at IWA

Gresham's keynote speech was a retrospective in the evolution of gun control tendencies and laws ever since the 1950s – when the first calls for specific bans on handguns and other types of firearms started to arise in the United States and the United Kingdom despite gun ownership for hunting and target practice being widespread and mostly socially accepted in both Countries – and down to the "Cultural revolution" of the 1960s, with modern gun control advocacy finding its roots in the hippy and anti-Vietnam War movements as well as in the social and political turmoil caused by the John F. Kennedy and Martin Luther King, Jr. murders in the United States, and gun control laws being passed in the 1960s-1970s all through the United States and Europe as political terrorism rose its ugly head. In no way, of course, those laws contributed to stifle the level of violence in those societies.
That, in turn, is what prompted the National Rifle Association of America to turn into a true gun rights advocacy lobby with the establishment of the Initiative for Legislative Action in 1975.

What safeguarded the right to keep and bear arms and the popularity of gun ownership in the United States, Gresham noted, was the return of a widely accepted perception of guns as means of self-defense – this being seen as an unalienable right that can not be fully delegated to the State. This, in turn, caused the Democrats – notoriously the biggest supporters of gun control in the United States – to lose control of Congress after maintaining it for almost forty years following their passage of the 1994 Assault Weapons Ban, which expired ten years later.
But, as Gresham warns, danger is always lurking behind the corner. And we may add, with our world – and its institutions – being mostly incapable to reach out to the youngest generations to educate them to the joy of shooting, the beauty of gun rights, and save them from the lies of the anti-gun propaganda that children are subject to as early as in school age, our community may soon be facing a new enemy: our own children, raised and thaught to hate us under our own nose.

It's thus somewhat discouraging to see that, despite the usual appeals to action and pro-activity, once again most of the organizations that exist under the WFSA umbrella do not seem willing to invest or engage in communication with the public opinion, as if the WFSA's own seminar of September 2017 had fallen on deaf ears – and to make things worse, with social media and social networks themselves being free to constantly erode on our community's freedom of expression as most of the industry and the organizations of our world seem incapable of doing anything but sit and watch.

And while we can certainly congratulate a great gun rights advocate like Tim Gresham for receiving the 2018 Dr. Vito Genco Shooting Ambassador Award, that's just as far as the actions of the WFSA and its member organizations go in terms of communication. "Staying informed" is not enough to "stay ahead". Communication and outreach towards the public opinion are also paramount, and under this point of view, our world – in Europe more than in north America – is tragically staying pretty much behind. And time is running out.