Tinck Arms of Slovenia launches the Perun X16, available as a complete rifle or as a modularity kit for AR-15 lower receivers: a fully machined aluminum upper, a totally modular and multicaliber system to build your AR into… something else entirely! 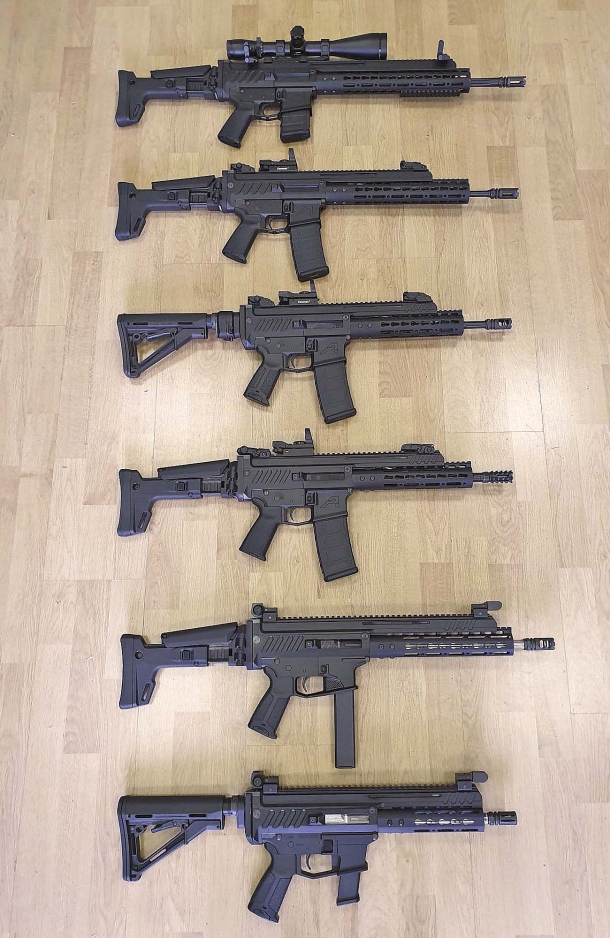 In the past few years, the launch of the REX Firearms Zero1, Alpha and Delta pistols by the AREX company turned the spotlight on Slovenia as a manufacturer of quality firearms for sporting, defensive, and professional applications that would be solidly capable to compete on the global market.

As of today, however, Slovenia did not have a locally-manufactured modern tactical rifle – either for military, Police, or civilian sporting and defensive purposes.

Everything changed just short of one week ago, when the Tinck Arms company, headquartered in the small Slovenian town of Cerkno, announced the revolutionary PERUN X16.

Named after the god of thunder in ancient Slavic pantheon, this interesting platform is fully contained in a CNC-machined, monolithic aircraft-grade aluminum upper receiver with steel guides, hosting a proprietary bolt and bolt carrier group with integrated return spring and recoil buffer system.

Manufactured both as complete rifle and as a modularity kit for AR-15 lower receivers – which would require small modifications for compatibility, notably the removal of the buffer tube interface, as the system doesn’t need a recoil buffer to work – the Perun X16 departs significantly from any other buffer-less upper receiver for AR-15 lowers because, essentially, the upper itself and the proprietary BCG are all that’s in it.

Literally everything else in this gun is left to the user to select and install, with very little to no gunsmithing skills required and with a dedicated tool issued with each modularity kit.

Either by using whatever the he or she has handy or by shopping on Brownells and other similar platforms, the user can install any AR-15 barrel, barrel nut and free-float handguard on the Perun X16.

Being compatible with AR-15 lowers and barrels, the Perun X16 is also totally multicaliber. It’s up to the user to decide what to do with his or her Perun X16, making the assembly of anything from pistols and pistol-caliber carbines up to SBRs and full-length rifles totally feasible. The Perun X16 will feed from any magazine compatible with the lower receiver in use.

The configuration of controls on the Perun X16 are thus the same as any AR-15, exception made for the cocking handle. Given the proprietary design of the bolt carrier group – as shown on YouTube by the popular Polenar Tactical channel, the first to try the system – a Perun X16 based firearm will come with a practical, ambidextrous, non-reciprocating side-mounted cocking handle.

Both as a complete firearm and as a modularity kit for AR-15 lowers, the Perun X16 comes from factory without any sort of sighting system.

A full-length top MIL-STD 1913 Picatinny rail for optics or flip-up emergency sights is machined directly on the upper receiver; other rail segments for accessories will be hosted on the handguard, at the user’s will.

Last, but not least, the Perun X16 will use either standard M4-type collapsible stocks and relevant buffer tubes, or an ACR-type folding and collapsible stock via a factory-issued interface.

The Perun X16 system is already in production and available for purchase. Interested customers should contact Tinck Arms directly for information concerning availability and pricing; be advised that, since it hosts a proprietary bolt and bolt carrier group, it could be considered a controlled item subject to export and import authorizations in some Countries.

Either way, the Tinck Arms Perun X16 definitely stands out in the modern market as a very interesting, practically viable alternative for whoever wants to exploit readily available AR-15 parts and AR-15 lowers to build a next-generation modern sporting rifle that brings the sheer concept of modularity to a whole new level.