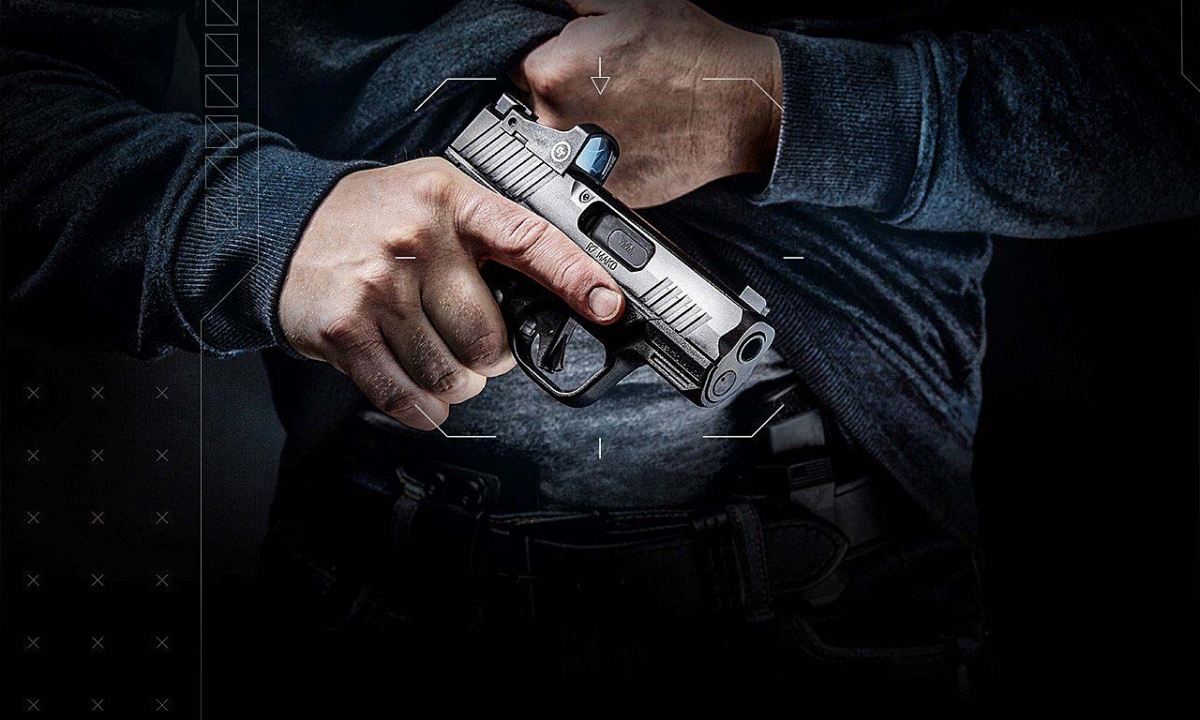 The Kimber R7 Mako 9mm sub-compact semi-automatic pistol is the first polymer frame, striker-fired handgun to be offered by Kimber of America, a company best known worldwide for its wide range of 1911 type pistol variants for sport shooting, tactical, and defensive applications.

Like so many others before, Kimber decided to address the new R7 Mako to the concealed carry market, which has been steadily growing in the United States following a constant trend of CCW-friendly laws being adopted nationwide. Offering more than meets the eye, other than just being aesthetically captivating, the new Kimber R7 Mako features numerous interesting technical solutions that make it particularly appealing for first-time gun owners and experienced shooters alike.

The Kimber R7 Mako is a locked-breech, tilting barrel pistol based on a very interesting take on the overall concept: a large locking lug is located on top of the barrel, just behind the chamber, and engages a locking surface machined within the top portion of the slide. This reduces the inclination angle that's necessary for the gun to circle, improving accuracy and feeding reliability.

The machined stainless steel, protected by a full FNC finish, features a distinctive ejection window without a top opening of sorts. This peculiar design reduces the portion of the barrel that is exposed at any given time, thus playing a pivotal role in preventing snags when the R7 Mako is drawn from the holster, as well as reducing the open portions from where foreign bodies and dirt could enter the system. Last, but not least, the peculiar design and position of the ejection window keeps spent cases and shooting residues well away from the optics.

Like most current-generation handguns, the new Kimber R7 Mako is optics-ready by design, with a dedicated interface machined on the top portion of the slide – just in front of the rear sight – for micro red-dot sights. The factory-issued TruGlo Tritium Pro sights, with orange front ring and white rear dots, are just of the right height to fully co-witness with the optics.

The Kimber R7 Mako is availabile in a baseline OR (Optics Ready) version and in the OI (Optics Installed) variant, this one coming issued from factory with a Crimson Trace CT-1500 – a small-sized, highly effective micro red dot sights offering a 3 MOA center dot, a movement-activated on/off function, automatic brightness setting, and a 500 to 650 hours lifespan for a single CR2032 battery.

The slide of the Kimber R7 Mako pistol is designed for quick, snag-free holstering and drawing, and features front and rear slide serrations. The 8,5 cm / 3.37" barrel features a 1:10" LH twist pattern and a captive recoil spring on a separate polymer guide rod.

The frame of the R7 Mako pistol is manufactured out of fiberglass-reinforced nylon, and hosts the trigger components in a separate stainless steel central block which is the serialized component.

The magazine release catch, hold open release lever and Glock-type disassembly lever are all ambidextrous. An undercut trigger guard and a near full-wrap checkering pattern make the Kimber R7 Mako very solid to hold and control; a short accessory rail is also cut on the dust cover.

The technical specs of the Kimber R7 Mako pistol

The Kimber R7 Mako also features a dedicated, non-adjustable defensive trigger – dubbed the Performance Carry Trigger – providing a smooth, consistent pull and a clean break at 2,2 - 3 kilograms (5 to 6.75 lbs) with every shot. The trigger safety blade is the only external safety system to be found on the R7 Mako, making it very simple and yet safe to operate.

The Kimber R7 Mako is 157 mm / 6.2" long overall, weighs in at 552 grams (19.5 oz.) when empty, and feeds through double-stack metal magazines with a bright orange reinforced polymer elevator and a checkered black polymer baseplate. Overall capacity ranges from 12 rounds with flush-fit magazines to 14 rounds with extended magazines.

The Kimber R7 Mako is currently offered on the US market at a manufacturer's suggested retail price of $599.00 for the baseline OR (Optics Ready) model and $799.00 for the Optics Installed model. Potential buyers from outside the United States may want to contact their national authorized Kimber distributor for local availability and pricing.

VIDEO / Kimber’s R7 Mako. Feed Your Appetite For Something Different.