The Ukrainian FORT Science Industrial Association, a major manufacturer of service pistols and other duty firearms, introduced a new sub-machine gun prototype dubbed the FORT-230 at the latest Arms and Security expo in Kiev: a new major contender on the global market for PDWs? 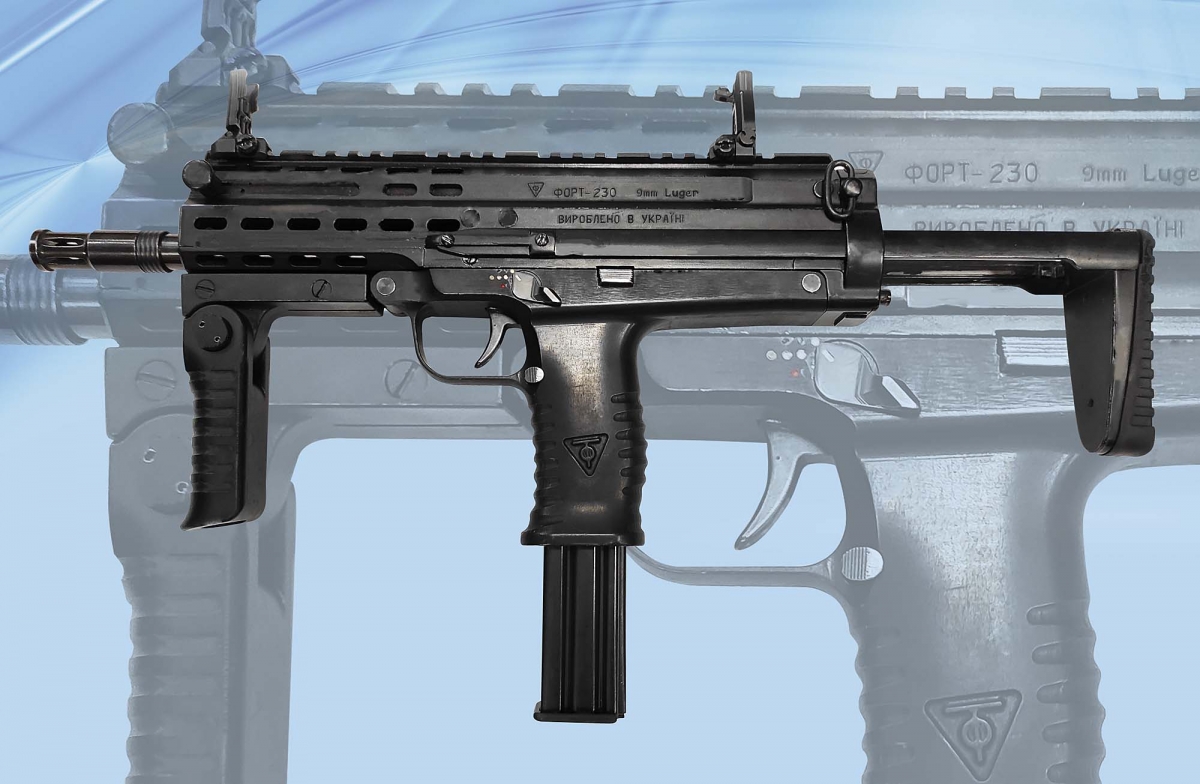 First introduced at the 2021 edition of the "Arms and Security" expo in Kiev just a handful of weeks ago, the new FORT-230 sub-machine gun is a compact automatic firearm for military and law enforcement customers

The Science Industrial Association RPC "Fort" was established in the Ukrainian city of Vinnitsiya in 1991; fully owned and operated by the Ukrainian Ministry of Interior, it is now a well-established – albeit little-known on the western markets – manufacturer of service pistols and other armaments and pieces of equipment used by Ukrainian military and law enforcement, with some success on the export markets.

The FORT product line includes AKM rifle derivatives; a set of locally engineered and manufactured semi-automatic pistols in calibers such as .380 ACP, 9x18mm PM, 9x19mm and 5.7x28mm, mostly based on the highly successful CZ-75 layout; derivatives of the Galil, Tavor, Negev and UZI manufactured under license from IWI - Israel Weapon Industries; a line of locally-designed pump-action shotguns dubbed the FORT-500; and a local licensed clone of the Swiss B&T GL-06 single-shot break-open grenade launcher.

At the 2021 edition of the "Arms and Security" expo, held in Kiev from June 15th to June 18th, the FORT enterprise introduced the protoptype of a brand new compact sub-machine gun dubbed the FORT-230, apparently designed to fulfill the role of PDW (Personal Defense Weapon) and CQB (Close Quarters Battle) weapon for military and law enforcement customers.

The technical specifications of the new FORT-230 sub-machine gun

The FORT-230 is a compact, blowback-operated, closed-bolt sub-machine gun that feeds through proprietary double-stack metal magazines hosted inside the pistol grip. The new FORT-230 is chambered in 9x19mm (also known as 9mm Luger, 9mm Parabellum or 9 NATO in the former communist Bloc), and the proprietary magazines are available in 20-rounds and 30-rounds variants.

The samples of the FORT-230 sub-machine gun showcased at the 2021 "Arms and Security" expo in Kiev were visibly pre-production prototypes, but unless the design undergoes major changes before full production kicks off – if ever – the new Ukrainian PDW should feature a full metal receiver and a synthetic frame with a vertical pistol grip and a folding foregrip that can be set to four different positions to adapt to different shooting styles and positions.

The metal receiver features a side-mounted, frontal charging handle that can be reversed for left-handed or right-handed operation; a full-length top MIL-STD 1913 Picatinny rail for optical sights or electro-optics, which also hosts a set of folding back-up iron sights; and a set of front slots for additional Picatinny rail segments, providing plenty of room for tactical accessories.

The polymer frame hosts an ambidextrous three positions selector right above the trigger guard, providing a safety position both and semi-automatic and full-automatic options; an ambidextrous magazine catch; and a likewise ambidextrous hold open release lever. The latter (mag catch and hold-open release lever) are located more or less in the same position where they would be found on a semi-automatic pistol, making the FORT-230 easier to familiarize with by personnel that's already trained to use service handguns.

A fully collapsible buttstock, with metal strutts and a synthetic buttpad, can be extended on three different positions. The rate of fire declared for the FORT-230 in full-automatic ranges around 800 rounds per minute.

The FORT-230 sub-machine gun is 40 cm / 15.74" long overall with the stock fully collapsed and up to 60 cm / 23.62" long with the stock fully extended; the 19 cm / 7.48" barrel features a proprietary muzzle device that also dubs as a quick-attach mounting point for a sound suppressor.

The RPC "Fort" Company showcased two versions of the FORT-230 at the "Arms and Security" expo – a matte black and a desert tan variant – but images released by the Company to GUNSweek.com seem to tease the existance of an olive drab green model as well.

Numerous interesting prototypes were introduced in the last decade by the Ukrainian national firearms industry, no doubt due to the ongoing impulse provided by the lengthy state of unrest in the eastern part of the Country; many were, indeed, showcased at the "Arms and Security" expo in the past years. A vast portion of those prototypes, however, never reached mass production.

The FORT-230 sub-machine gun could be an exception, as the RPC "Fort" Company lately released a video that shows the existance of fully functional models – or at least working pre-production samples built for test and evaluation.

As of today, lacking specific information from RPC "Fort", we can't even start to fathom whether or not a semi-automatic version for civilian sales and private security companies will be offered in the future.

What we can say is that, should the FORT-230 indeed enter mass production, it could easily become a cost-effective hit among military and law enforcement customers in the Middle and Far East, in Africa, in south-eastern Asia, and on other so-called "emerging" markets, directly challenging higher-priced products from western manufacturers for that specific market segment.

Over 60% of US Counties are now "Second Amendment Sanctuaries!"
Current