I stumbled on the Leupold D-EVO almost by accident, in my search for a 1-6X variable scope to mount on my M4. I have soon realized that had to test it 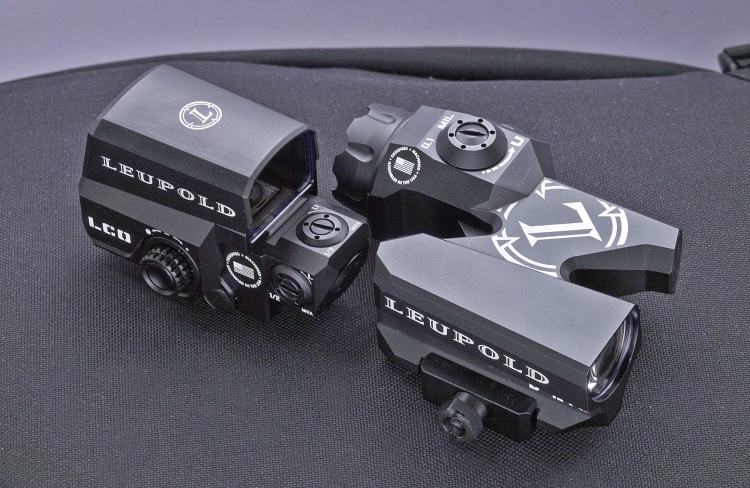 The Leupold D-EVO is a simple yet clever device: a 6x sight that mounts on the rail of your rifle, behind a reflex red dot sight like the Leupold LCO (but any other red dot sight will work, as long as it clears the D-EVO).

What’s peculiar is that the Leupold D-EVO doesn’t work in direct line of sight, but it’s like a sideways periscope. A double set of prisms inside the device rebound light so that the front lens and eyepiece are offset to look “around” the RDS.

The eyepiece itself is peculiar as it is not circular, but flattened on the top portion so that, when seen from the shooting position, the Leupold LCO and the Leupold D-EVO sight pictures complete each other.

One may wonder why go to these lengths of “weird design” when there are good 1-6 scopes or 3x – 4x flip mount magnifiers on the market. Well, the D-EVO solves many issues related to conventional solutions. 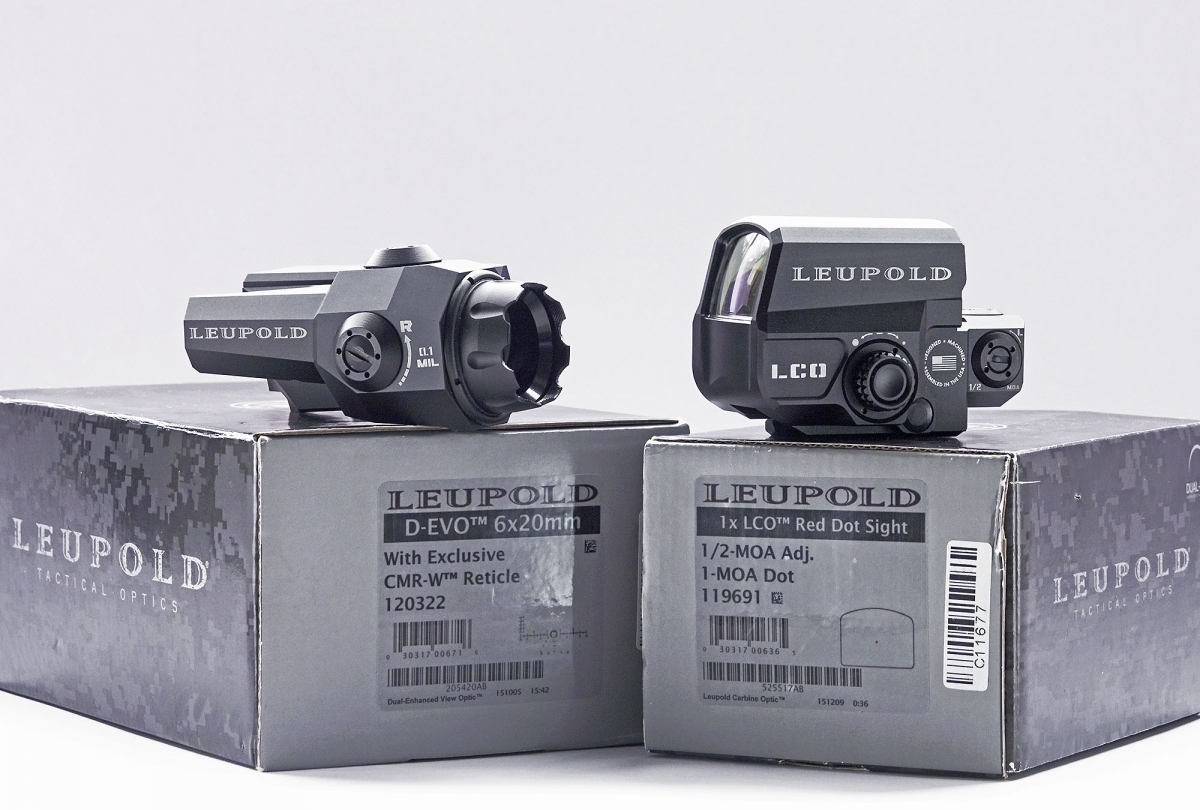 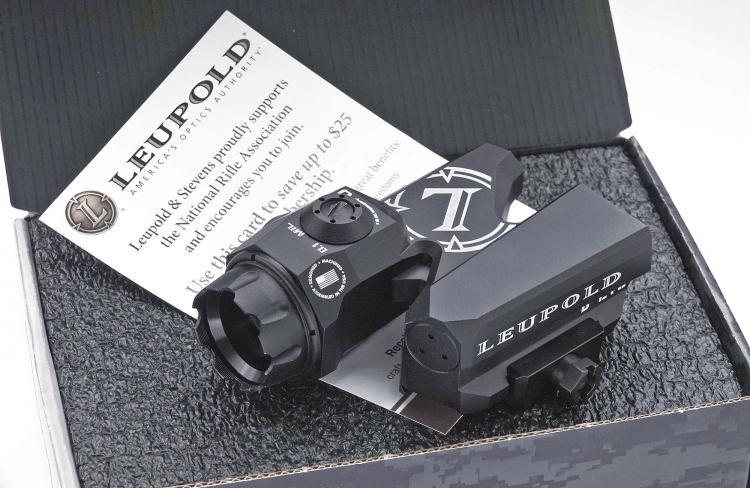 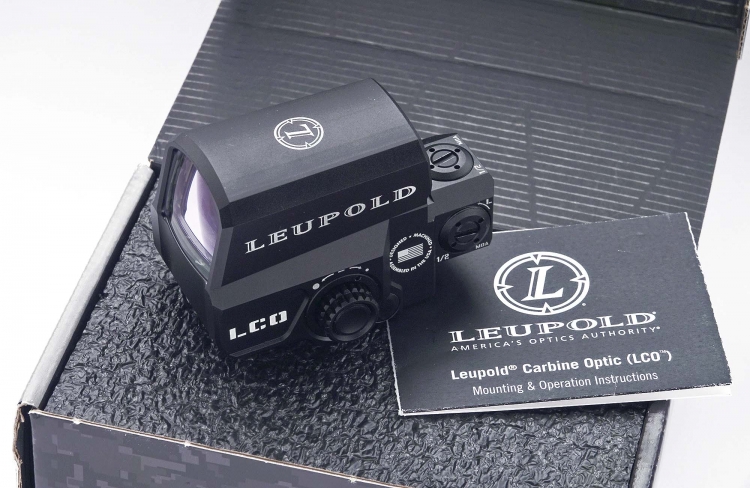 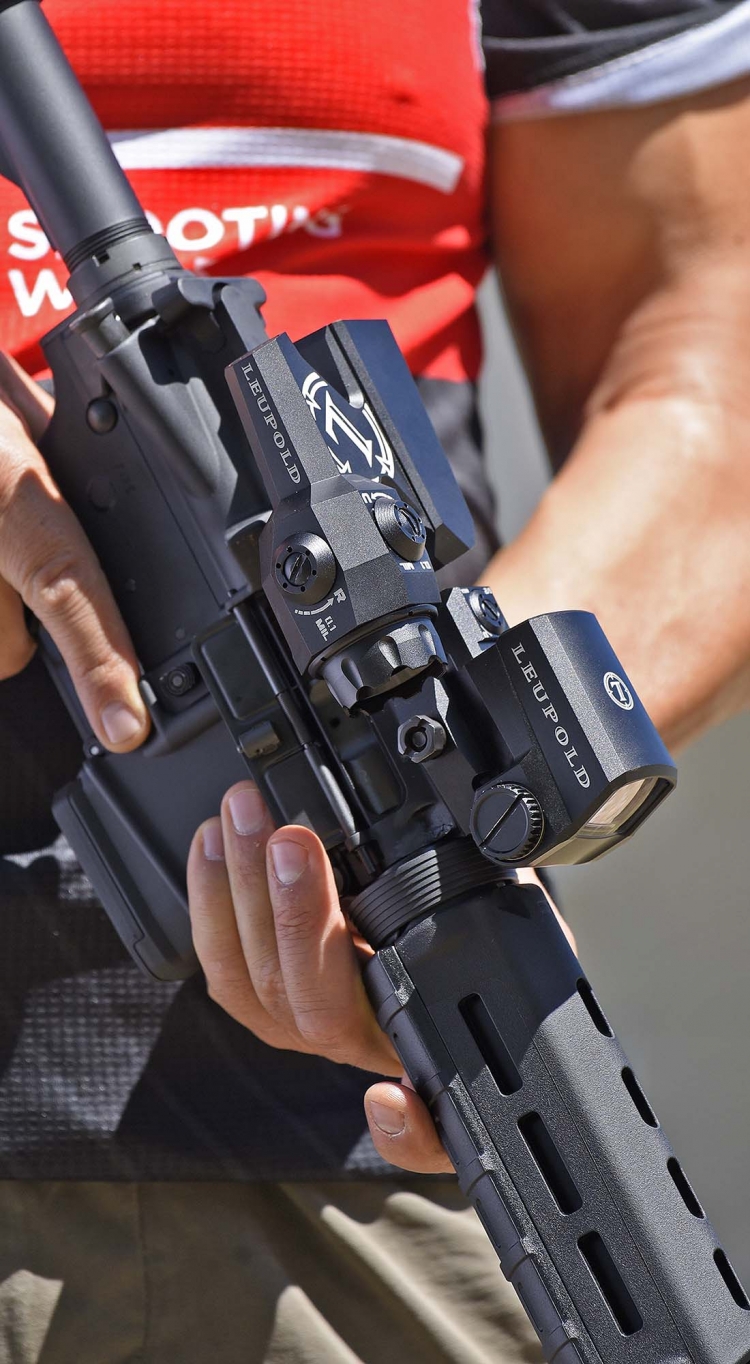 Despite the intriguing visual aspet, in perfect "Star Wars" style, the two mounted optics grab out a lot of space

During this analysis, we should always keep firmly in mind that, while it can be very well used alone, the Leupold D-EVO is meant to be used coupled with a red dot sight, preferably a reflex RDS, and we will analyse its features in this light.

First, low power variable scopes in the 1-6 range are quite heavy. Even if you have to sum the weight of a red dot to the 391 grams of the Leupold D-EVO, the combo is still lighter than most scopes on the market (and you must add the weight of the mounting rings to scope weight).

But even at 1x magnification, a variable scope requires pretty good eye alignment to the eyepiece and sight picture acquisition is not even near as fast as a traditional red dot sight or reflex sight.

While useable, you are trading the main advantage of a red dot sight, lightning fast acquisition, for better long range capabilities. You can compensate learning to maintain a consistent cheek weld and shooting position, something the D-EVO needs as well to fully exploit all its advantages coupled with a RDS… but not something the RDS itself requires.

So, in an emergency, you may well use the RDS as it’s meant to be used, with the head up for a snap shot and better situational awareness, foregoing the D-EVO, and still fully exploit the D-EVO when you have the time and means to do so. 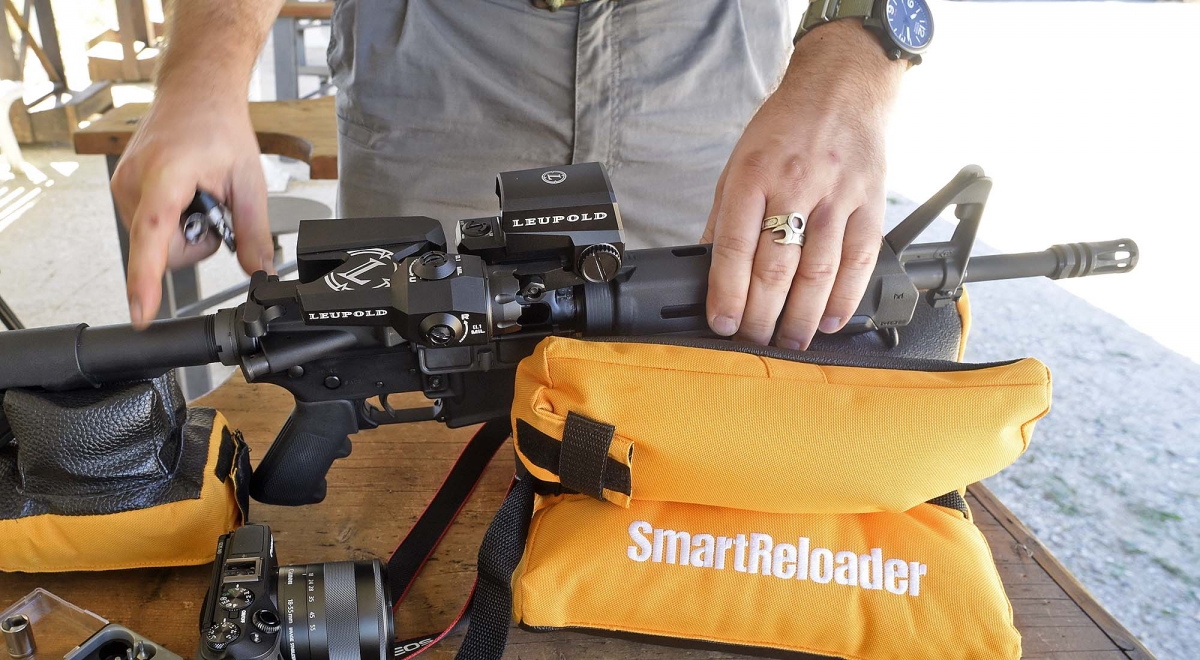 For our testing, the Leupold D-EVO and the LCO sight have been mounted on a Colt M4 Commando with a 12" barrel 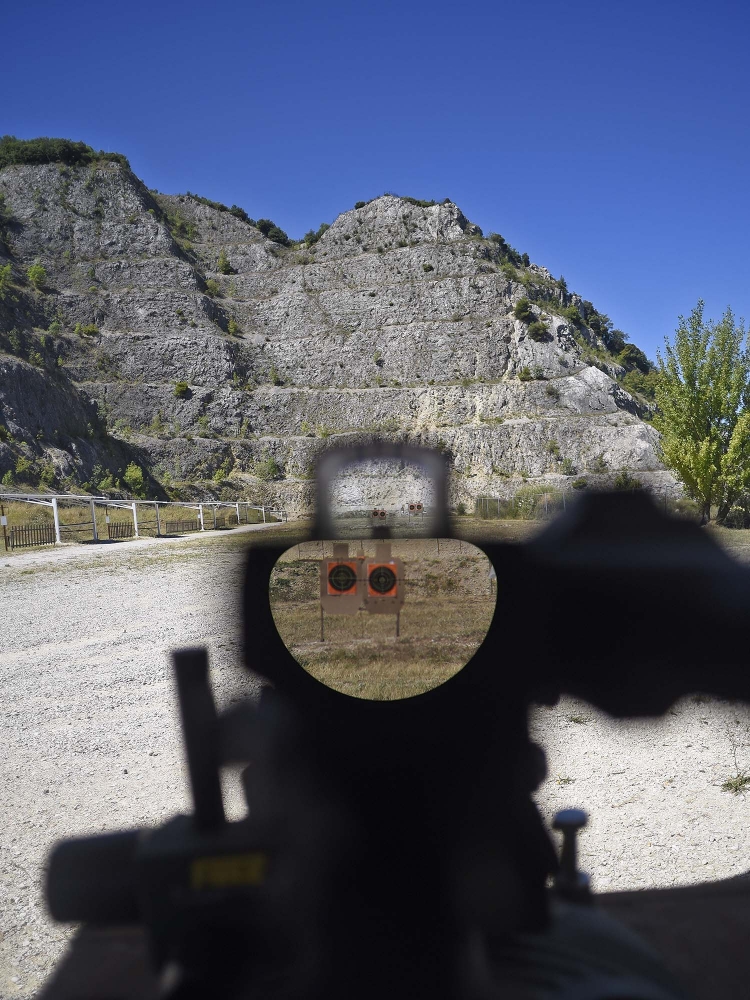 Moreover, variable optics need time to zoom back and forth, flip mount magnifiers need to press a button to switch to 1x, and to be flipped back for magnification, while micro RDS mounted together with scopes force the shooter to cant the gun or greatly increase vertical encumbrance of the rifle when mounted on top of other optical aiming devices: the D-EVO works instantaneously. You just need to slightly move your eyeball to get the magnified image, or look back up to use the RDS.

Even at short distances, you may use the D-EVO for better target identification before using the red dot to aim.

At longer distances, you may keep your eye on the RDS for better situational awareness while aiming at a target, then flick your eye down to the D-EVO for refining your aim a fraction of a second before taking the shot.

Also, while a single optical device will be zeroed in at a single distance, which may not be ideal for both short and long range engagements, requiring a modicum of hold over to compensate, you may zero your RDS at 25 meters and your D-EVO at 200, having each aiming device precisely zeroed at a chosen distance. 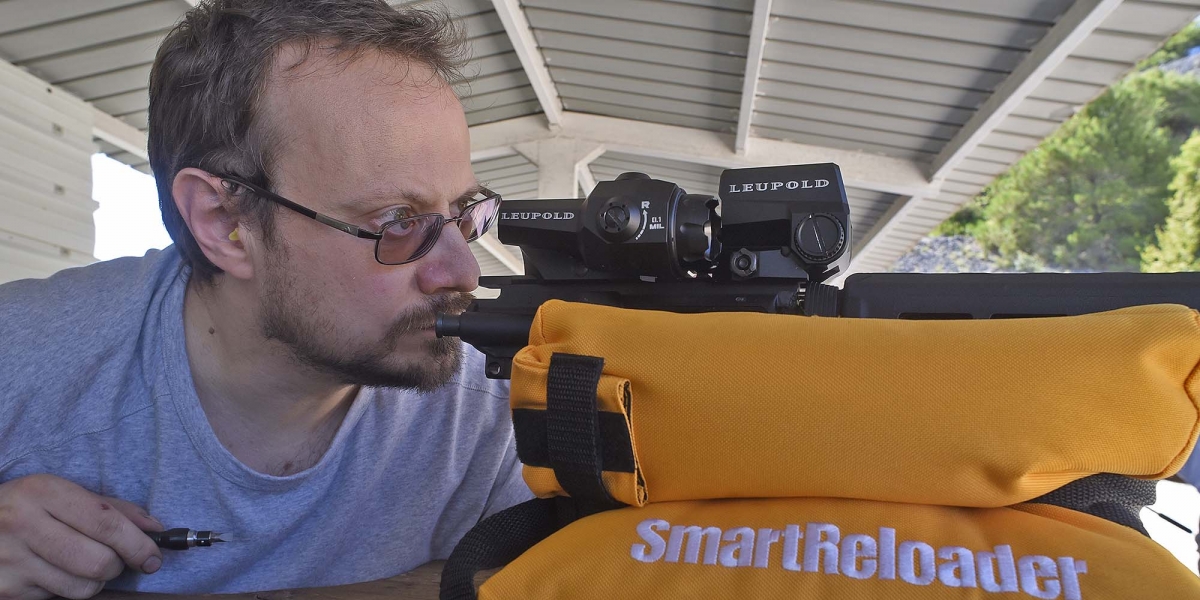 Mounted on the rifle, the two optics are controlled, to veryify proper allignment 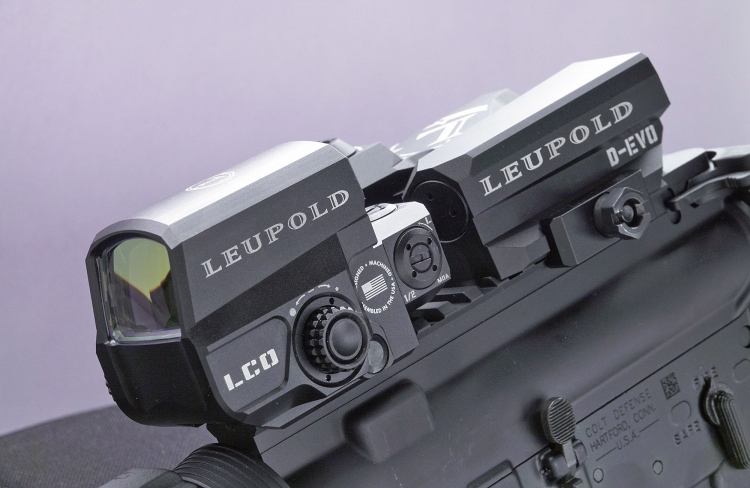 The two optics are shaped in a way so that the D-EVO is placed behind the LCO, lowered, to free the Red Dot line of sight

The D-EVO reticle has many interesting features. It has ballistic drop compensation, so that you just need to zero it in and you are done. It also has wind hold markings at various distances and a range finder feature.

The BDC reticle is peculiar in that it is slightly canted sideways: this is necessary to compensate for the lateral offset of the scope from the muzzle. Adjustment is in 0,1 MIL increments per click, 0,1 MIL equalling 1 cm at 100 meters so that zeroing is very easy for metric shooters. 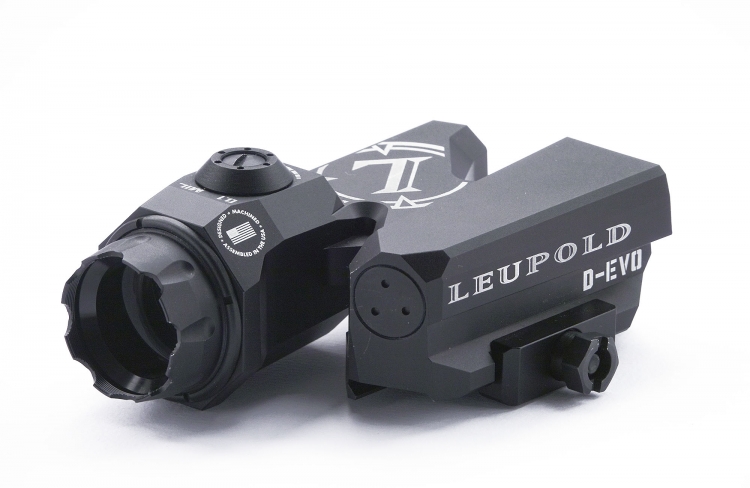 Front view of the Leupold D-EVO 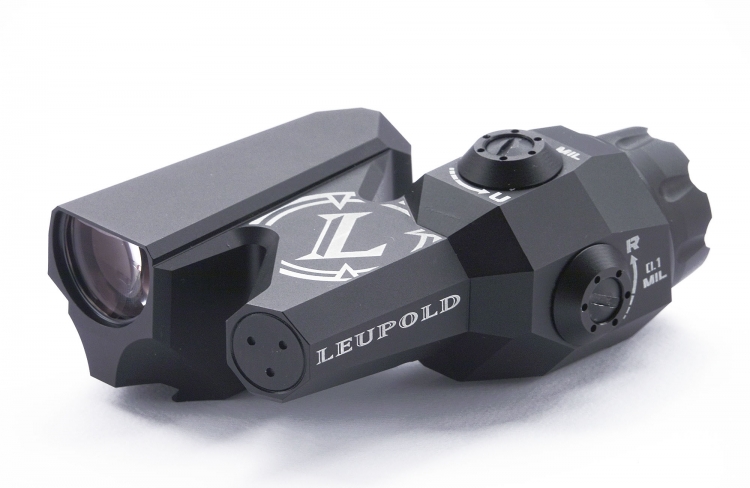 Back view of the Leupold D-EVO

With all its appreciable features, the D-EVO is not free of some drawbacks.

First, it bulges out on the right side of the firearm. While this may not be a big problem on guns that are often equipped with a tactical flashlight, laser designator and such, it’s a factor to consider.

Second, it partially occludes the field of view for a left handed shooter.

Third, it takes up further room on the rail of your rifle, which may leave precious little to no room at all for BUIS (but this is even more true for a flip mount magnifier, and the D-EVO needs considerably less room). 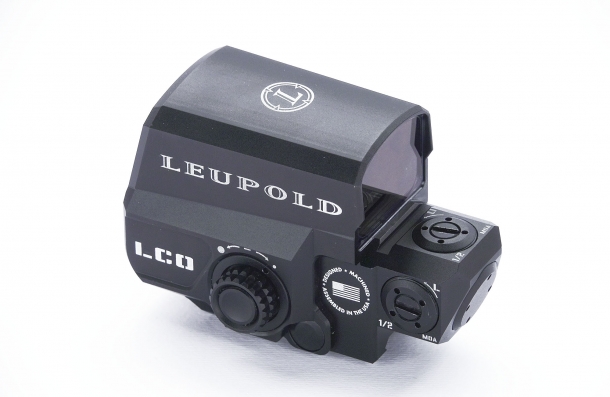 Left side of the LCO, with the control for the red dot intesity 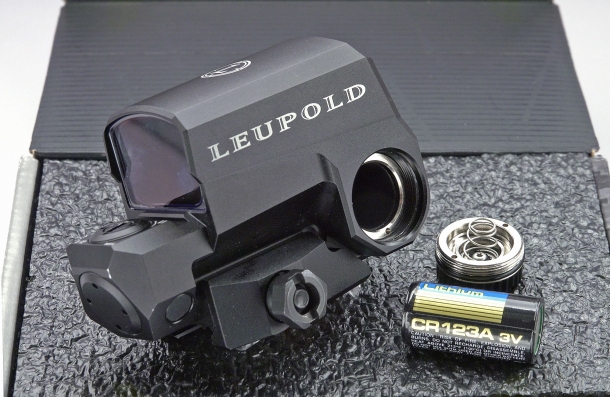 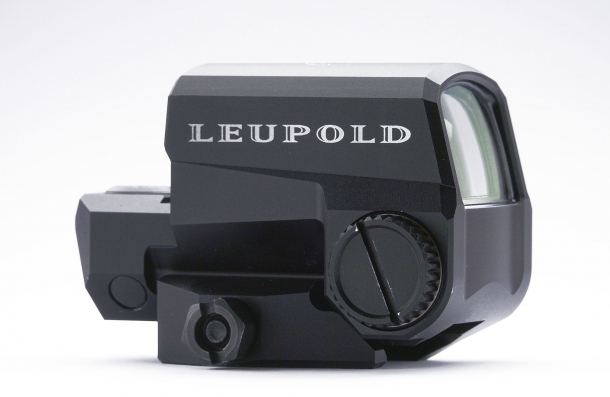 LCO's right side, with the battery compartment cap

Finally, not unlikely many compact sights, the D-EVO has a fixed parallax setting. Shooting at 100 meters from the bench with an M4 highlighted this “problem”: the D-EVO requires a consistent cheek weld to shoot tight groups.

This is relevant only in terms of target shooting, as for the intended use of the sight the effect is anyway perfectly within tolerable limits.

I had not the time to verify at which distance the sight is zeroed for parallax, but Leupold’s instruction manual for the CM-RW reticle (from which the CMR-W Devo reticle is derived) recommends a 200 meters zero, suggesting this is the preset parallax setting. 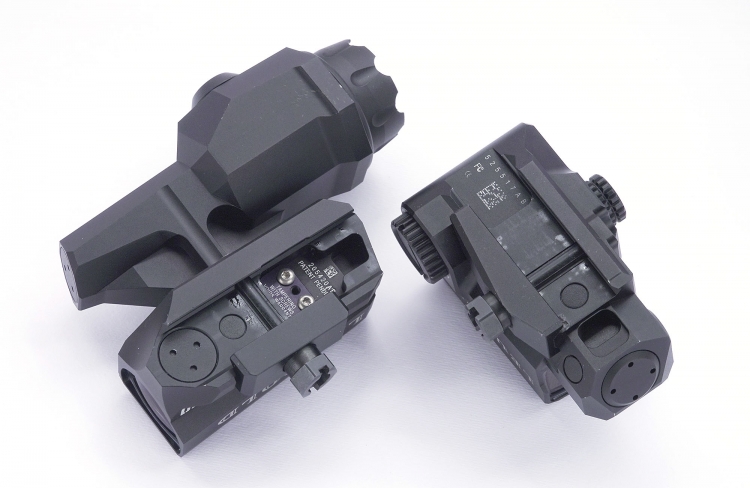 Bottom view of the two optics, with the Picatinny rail connectors 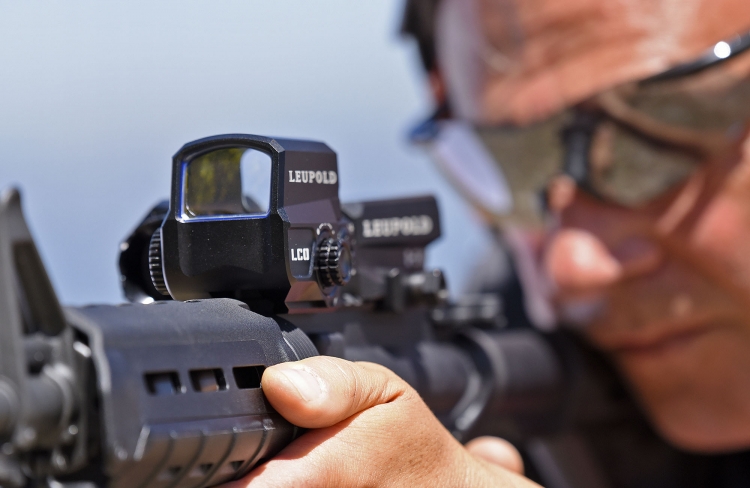 Red Dot and 1-16x optics usable simultaneously: practical, but it requires some training

These are small prices to pay for a device that elegantly solves a significant problem that soldiers, hunters and action shooters face: engaging targets at widely varying distances that require different, very specific aiming solutions on the same rifle.

Speaking of the price to pay, the D-EVO is not cheap, at a MSRP of almost 2000$, but you can find it already at far lower prices (a widely known online sales website lists the D-EVO at 1349$). To this, you must add the price of a good RDS. Still, it costs less than many high end variable scopes and offers significant advantages.

What the D-EVO is not, is a target or sniper scope. It’s a tactical or hunting implement, meant to give the shooter an instant choice between a close range solution and a middle to long range one, at a glance. 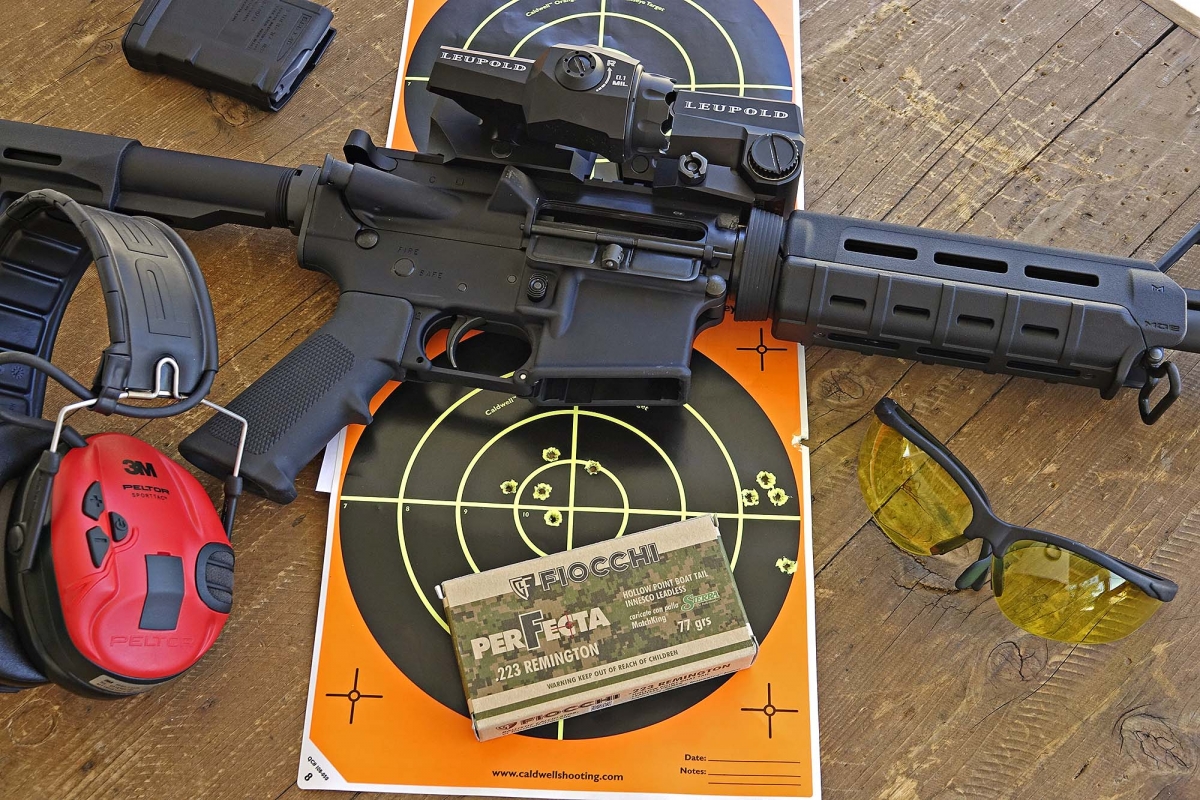 Two groups taken at a 100m distance, before (at right) and after sighting in the D-EVO optic 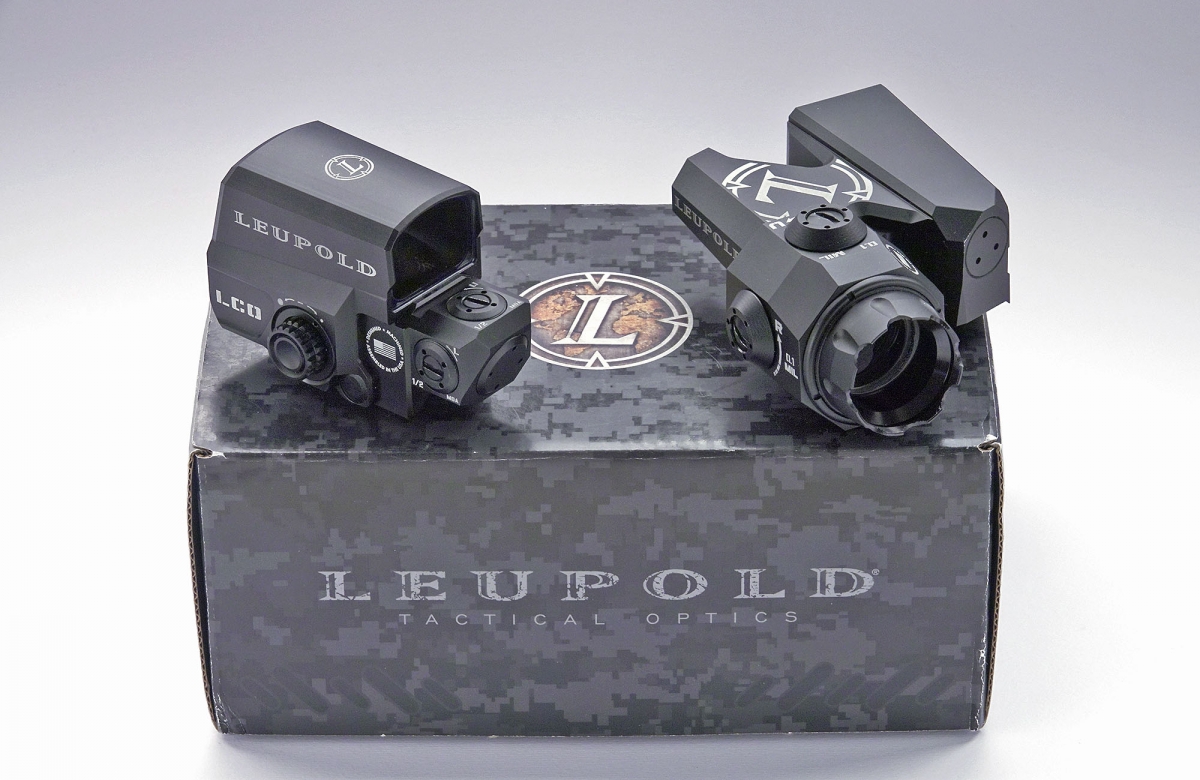