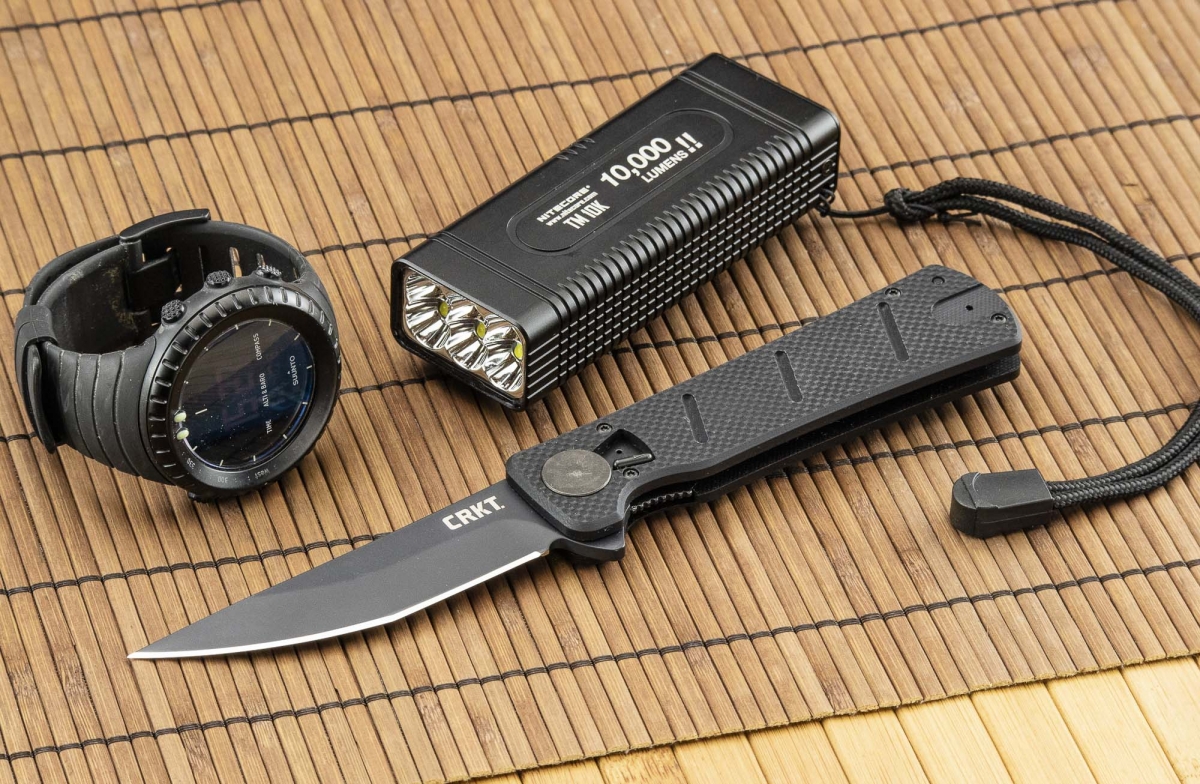 The CRKT Goken is a compact, folding knife specifically designed for EDC and self defense.

The design is obviously based on the japanese tanto knife but, instead of using a classic modern “tanto” point (which, by the way, no japanese blade ever had), it copies the ancient Osoraku Zukuri point profile, effective both in slashing and in piercing that was often used in short blades meant for battle use.

The blade itself is 3.69” long, made of 1.4116 steel (a variant of 420HC), usually used for scalpel blades, and indeed comes from the factory scary sharp. While not astounding in terms of edge retention, it has excellent resistance to oxidation, which is good in a knife meant to be carried a lot.

The point is extremely acute  and good at its job: while the blade is a little short for proper use as a weapon (as is the case with most folders), I bet nobody would want to mess with it.

The blade is opened through a flipper on the back that, together with the finger notch in the grip, doubles as a stubby handguard. There’s no other opening method (more on this below).

About dual purposing a knife

About dual purposing a knife

While for several reasons I mainly consider knives as tools, rather than self defense weapons, if you were to choose the CRKT Goken as such (where permitted by local laws) I strongly caution against dual purposing a knife for both EDC and self defense, not because the CRKT Goken can’t do both well, but because it’s not good practice to use for everyday chores something you plan to defend your life with, least you find defending yourself with a dull edge and blunt point.  A knife meant for use as a weapon should not be used for any other purpose, its edge and point untouched until needed for serious business.

With the Goken, CRKT takes the tanto shape and makes it compact and easy to carry, without renouncing a generous handle big enough to offer comfortable room even to large hands. The wide G10 scales are textured with a square dimpled pattern offering a very firm grip, further enhanced by three deep, slanted grooves on each side.

The right panel carries also the liner lock spring and the pocket clip, which is wide, matte black and bent so that the whole knife disappears from sight.

Due to the clip shape and the peculiar disassembly system of the CRKT Goken, the only clip option is tip up carry, but you can swap the clip to the other side for right or left handed carry. The knife is very slim and can be carried comfortably in a pocket or in an IWB position.

Coming to the disassembly system, it’s actually very easy: with a closed knife just actuate the disassembly lever at the pivot point, then grab the knife with the knurled knob on the butt of the grip under your thumb, and use it to rotate it until the grips come loose. You may then proceed to clean and lubricate the knife.

To reassemble, just proceed in opposite order, ressing the grip panels together at the tip to actuate the disassembly lever until it engages the stop.

Sharpening the blade is no hard chore, the steel being not so hard as to require specialty tools, but some skill is needed as you have to preserve the angle where the straight edge and the long arc of the tip converge.

A note on the particular specimen I have: this knife is pretty tight and while the blade pivots very smoothly, it is somewhat tight and the flipper action can’t open it past about three quarters of the way, even actuating it very vigorously.

I don’t know if this is an issue of this specific knife, or something concerning the whole model, and tweaking the torx screw of the pivot point just made the blade loose side-by-side or worsened the problem, but there are two easy ways to fix this.
The first, by flicking your wrist while actuating the flipper, so as to send the blade into lock, which is something one should always do anyway, as even the smoothest pivot can gum up with lint or dust.

The second, which is what several knife experts recommend in case of defensive use of any kind of folding knife, is using both hands to open it, in this case by using the flipper just to push the spine of the blade between thumb and index finger of your weak hand and then using both hands to completely and positively deploy the blade until it locks open.

This detail apart, which is really a venial sin, considering one should always use one of the aforementioned precautions no matter what, the CRKT Goken is truly a very good knife, whatever use you want to put it to.