Born from the collaboration between CRKT and knifemaker Eric Ochs, the CRKT Avant is a great EDC knife that combines severl virtues in a compact pocket blade. 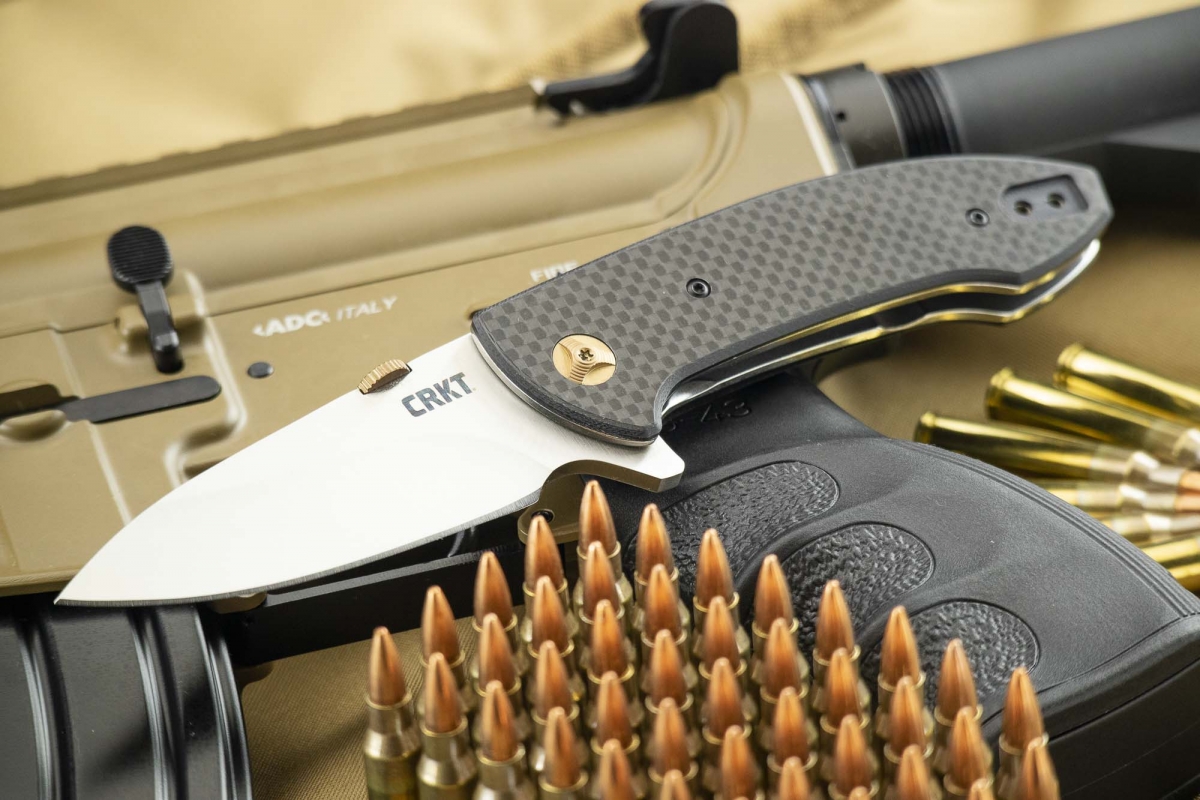 CRKT Avant - the top view shows the flipper and the nice "hammered" finish of the bronze-anodized insert.

Knives are usually built with a purpose, and that purpose dictates form, looks, technical characteristics and materials. Some knives can serve several different purposes by stretching it a little or with some adaptation on part of the user, but it’s rare the knife that can perform well in multiple tasks, and the CRKT Avant folding knife is just such knife.

Eric Ochs loves the outdoors and knows how much every gram of load counts, and how a tool must perform well and, possibly, perform several tasks.

The CRKT Avant has a spear point blade, built in 8Cr14MoV steel. I’ve often seen reviews stating how 8Cr14MoV is not “as great a steel as others”, but we must remember that choices like blade steel are always a compromise between contrasting factors, and if a customer buying a knife from a top knifemaker can afford a top price tag, not every customer can.

A good EDC knife for most should be a knife you carry constantly without fear of losing an expensive collector’s piece.

So, engineering a knife choosing a good steel that won’t poke a hole in the buyer’s wallet is a great choice from that standpoint. Choosing a steel that has good edge retention while still beeing easily resharpened with cheap and easy to get, or even impromptu field tools is another great choice for an EDC knife.

The blade is of a classical spearpoint design, classical and very effective both as a tool and as a defense weapon. The rounded, polished contour of the spine is a nice touch both aesthetically and functionally. The blade’s opening system relies both on a bronze anodized disc set in the spine by a screw, and the flipper seen on many current knives. This allows both for more traditional and secure hand opening and faster “flip” opening, also thanks to the IKBS bearing system.

The pivot pin screw is nicely accented in bronze, like all other details in the knife. While looking like some design screws seen on more hi-tech looking custom knives, usually requiring proprietary tools to unscrew, it has a discreet Torx 8 socket, which is standard in all CRKT knives, compatible with CRKT’s maintenance tool.

Scales are made out of elegant woven-textured carbon fiber layered over G10 panels set in steel liners. If the liners add some weight to the knife, they also add strength. The scales are set with Torx 6 screws, again standard for the firm and compatible with the mainenance tool.

The liners edges are polished to a mirror finish, edges smoothed and scalloped where the finger needs to operate the flipper and the liner lock. The left panel has a machined recess for the clip, which can be reversed to allow ambidextrous carry. The knife can be carried only in the tip up style, which allows faster deployment of the blade without having to rotate the knife in your hand first. And it also should be carried only to the back of the pocket, for safety.

The clip itself is light and effective, and is set with two flush-headed T-6 screws.

The Avant is a knife that is, at the same time, very elegant in his contrast of hi-tech carbon fiber and bronze-colored details, and very effective as an EDC tool, with enough blade to performe a lot of tasks, in a multitude of environments, from the office to the wild outdoors, without at the same time being too cumbersome or heavy (it’s actually surprisingly light for a knife with such dimensions) Finally, it’s also an effective defense weapon for those who want to (and can) supplement other means of defense with a blade.

With a very affordable price tag for such a versatile, well finished knife, is a good choice for anyone wanting a classy, effective and versatile EDC knife without breaking the bank account.

Check the official CRKT website...
(price may vary, depending on countries)