What if people took on the streets in arms? That's what happened today in the United States – and more specifically in the Virginia State capital of Richmond – with thousands of people gathering around the State Capitol to protest the gun control laws proposed by the Democrat majority. The result? No incidents, but a great message passed forth, with the full support of the vast majority of Sheriffs in the State! 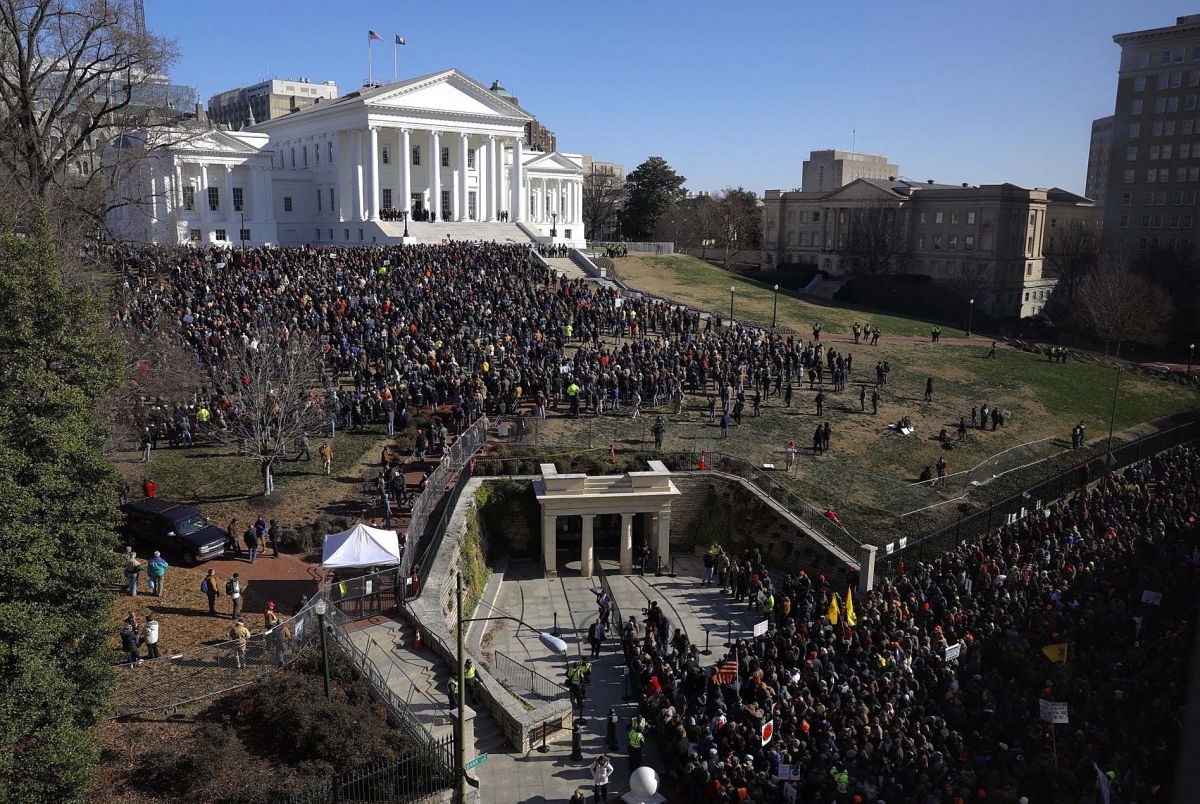 Over 20.000 people protested today in Richmond against the gun control laws brought forward by the Democrat majority at the Virginia State legislature

« What would ever happen if people took on the streets in arms?»

To this question, which is typical of the anti-gun crowd, we can now give a firm answer: nothing major. No major incident whatsoever.

It has been proven by the over twenty thousand people who gathered today under the Virginia State Capitol in Richmond – most of them armed with Modern Sporting Rifles such as AR-15 variants, many also wearing tactical garment and accessories – in order to protest against the plethora of gun control measures brought forward by the Democrat majority at the Virginia State legislature and by governor Ralph Northam.

The most draconian proposals, most notably the controversial Senate Bill 16 (an "assault weapons" and magazine ban) were dropped from consideration last week, but that did not stop the 2020 VCDL Lobby Day, organized by the Virginia Citizens Defense League to send a loud and clear message to the politicians in Richmond: the right to keep and bear arms as enshrined in the Second Amendment of the Constitution of the United States of America is seen by the people of Virginia as sacred and untouchable.

The protest against the gun control proposals was supported by the majority of the Sheriffs in the State. Immediately after the gun control bills were fist announced, the vast majority of elected chief law enforcement officials in Virginia jurisdictions moved to support their Counties in declaring themselves "Second amendment sanctuaries", meaning that no gun control law in contrast with the Second Amendment would be enforced there.

The 2020 VCLD Lobby Day – quickly dubbed the "Virginia gun rally" and concluded with no incident of sorts recorded anywhere – had been labeled by Democrat politicians US-wide as a potential "rally of neo-nazis, racists and angry white men", and fears of a more serious rehearsal of the 2017 Charlottesville disorders led governor Northam to declare a state of emergency for the day, banning citizens from bringing guns in the fenced square right in front of the Virginia State Capitol. Most legally armed protesters, indeed, remained outside of the perimeter, while a few thousands passed through the checkpoints and metal detectors bringing signs and chanting their disappointment straight at the windows of the halls of power.

The videos and pictures of the Virginia Gun Rally, spread through social media by the participants to trump the mainstream media's best efforts to downplay the true extent of the event, tell a different tale: white people, african-Americans, hispanics and Asians, feminists and LGBT community members and rights supporters, all gathering together to protest against the State legislature's attempts to disarm Virginians.

The people of Virginia went on to provide the world with a striking demonstration of how the Right to Keep and Bear Arms as enshrined in the Second Amendment of the Constitution of the United States has nothing to do with pioneering or even racism, and is not by no means connected only to personal defense, instead having been conceived by the Founding Fathers and today embraced by the American People as a supreme right to own and carry the most effective tools to protect all other freedoms and rights, particularly against politicians and authorities with tyrannical tendencies.

It is definitely not a case if the 2020 VCLD Lobby Day was held the same day as the 2020 Martin Luther King Jr. Day – the national holiday dedicated to celebrate the Civil Rights leader's life and legacy: the right to keep and bear arms, historically denied mainly to racial minorities (which were, ever since the end of the American Civil War and down to the 1960s, the main intended victims of gun control!), is today cherished by the vast majority of American citizens as a symbol of unity under freedom, and unity under the capability to defend said freedom.

And whatever gun control advocates may say or do, whatever their excuse, the American people is just not going to renounce their gun rights. With their elected Sheriffs by their side.