An interesting aiming system, hybrid between traditional sights and micro red dot sights, combining the best of both worlds 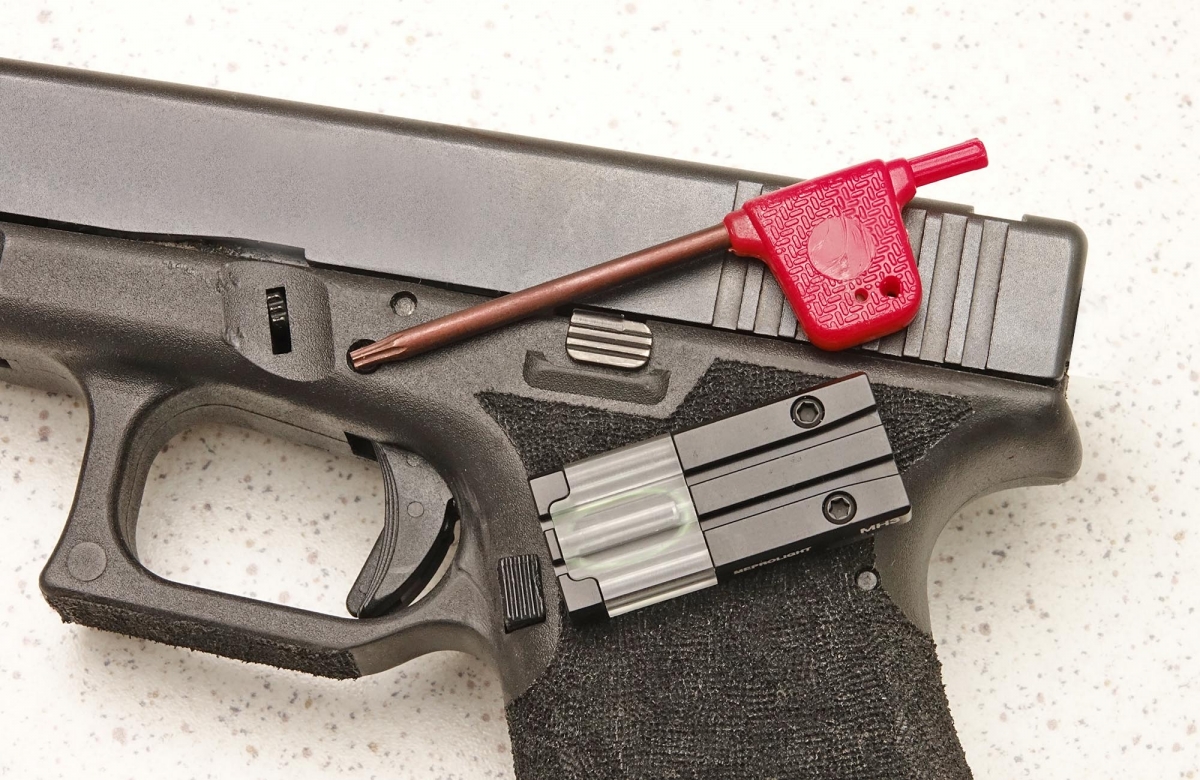 Basically a different concept of sighiting system, the Meprolight FT bullseye is a single piece aiming device, meaning that you don’t have a front and rear sight: the FT works by itself.

The sight is composed of an optic fiber and a vial of tritium that generate a dot, focused through a lens shaped so as to project a ring around the dot when the dot is centered.

The whole system is not much larger than most adjustable rear sights, and encumbrance is negligible if compared to a micro red dot sight, with comparable dot acquisition, meaning you have to present the gun damn well aligned with your eyes to get it. The two grooves on the upper side of the sight help in this sense.

What about the front sight?

Talking about front sights, the handgun in the pictures is my personal Glock 19. You’ll notice the front sight it’s still there.

This because I removed the rear sight replacing it with the FT Bullseye for testing, but left the front sight in place for two good reasons: removing it and putting it back after the tests would have been a royal PITA, and I wanted to have a traditional front sight to perform part of the shooting during testing, so as to be able to point shoot, shoot with the help of the front sight, and test the FT Bullseye at will.

The Meprolight FT bullseye is meant to be used two ways: you can either content yourself with seeing the green dot, which is enough to get decent alignment at short distances, or you can take care to center the dot in the circle, for more accurate shot placement.

Seeing the green dot means the gun is at least pointed in the generic direction of the target, and is much like taking aim with the front sight only. Aligning the dot with the circle is like using both front and rear sight, but it’s much faster. As for adjustment, the Bullseye has none. Zero. Nada.

While you can adjust, to some degree, even fixed sights, the FT Bullseye is frozen to its factory settings, and that’s it. If it shoots slightly off, the only way to correct is to offset your point of aim. As it’s meant for close quarter engagements, it’s an adequate trade-off, but see below.

The Bullseye is sold as a close quarter combat aiming devices, so as my first test I shot several strings just point shooting at 7 meters, looking directly at the target and disregarding the handgun and its aiming devices completely, trying to shoot as fast as I could get. Then I shot from the same distance using the FT Bullseye.

The results were mixed: the FT Bullseye was a tad slower to acquire and realign than just point shooting the gun, but groups were tighter. Unfortunately they were also off center by no trivial amount. Offsetting the point of aim brought the groups center of mass on the target, without slowing me down significantly.

What I was wondering was: am I printing tighter groups with the FT Bullseye because the aiming device helps me place shots more accurately, or just because it forces me to slow down a tad, enough to stabilize my shooting?
I tried again with point shooting, slowing down a bit, and groups got indeed much tighter, but not quite as tight as with the FT Bullseye.

Still, there’s not much point in tight groups at such close quarters as you don’t need bench rest accuracy in a defensive scenario: you need to put rounds on target. The real difference was in first shot timing: acquiring the FT Bullseye did slow down somewhat my first shot, which can be a significant drawback.

Getting off the first snap shot without trying to acquire the sight, and then following up with subsequent shots after at least seeing the green dot was more efficient, and still effective as it came to grouping. In the end, at this distance the FT Bullseye is a good thing to have on your gun in case you have to take better aim than just point shooting and be really fast nonetheless: it does make a difference compared with traditional sights, and I suspect that with further practice acquisition times would shrink a lot.

Test at 10 meters was conducted much like the test at 7 meters, and yelded about the same results: the FT Bullseye slowed me down a little, compared with just point shooting, and the first shot was better off as a snap shot without looking for the sights, while follow up shots were better placed and grouped with the FT Bullseye than just point shooting. The low and left offset was still an issue.

These are distances where you definitley won’t be point shooting, yet it’s not so far away. The FT Bullseye is sold as a close quarters implement, but I was curious about how it would perform at the edge of the envelope. The answer is: it did well. It allows the shooter to keep up the pace while still maintaining very good accuracy. The offset issue still applies.

I know these are quite unrealistic distances for a close quarter engagement, and something very seldom one will face in a self defense scenario, but since the sight performed well at 25 meters, I wanted to try it at something more extreme. I shot my trusted and tried CZ 75 at 50 meters, then tried the Glock 19 with the FT Bullseye.

While it didn’t group even close to the CZ with iron sights, three shots out of 5 went into the target, which is a remarkable result for something not meant for accuracy, used at 5 times its maximum intended range.

Truth is: the human eye is extremely good at placing circles concentrically, so even if the FT Bullseye has a limited line of sight, it’s still reasonably accurate even at such an extreme distance.

Is it meant to hit targets at 50 meters? Hell, no.

Will using a gun equipped with this sight prevent you from putting bullets on target at such an extreme range? Again, hell, no! If you can shoot, it will deliver.

While I didn’t find a meaningful advantage at very close ranges (under 7 meters) with better accuracy but slower times than just point shooting, the Meprolight FT bullseye gives the shooter an edge in the “gray area” between 7 and 25 meters, allowing better grouping and faster shooting, and it’s remarkably accurate in aimed fire, so much as to be still useable as far as 50 meters.

If you are accustomed at using sights at all distances, the FT Bullseye will definitely give you an edge speedwise, without sacrificing accuracy. Another huge advantage of the FT Bullseye, particularly for those with aging eyes, is that it doesn’t require to focus three objects at different distances: just look at the target and center the dot in the circle.

Its main drawback is it’s total lack of adjustment that forces the user to offset the point of aim in case it doesn’t coincide with the point of impact. I really wish Meprolight came up with a way of adjusting this little device. That would make it almost perfect.